Arthur Wilding is commemorated on the Pozieres Memorial, France, panel 25. 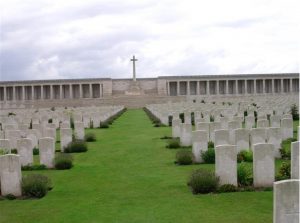 In the 1901 census Arthur was aged 9, living in The Street, Badwell Ash, with his father Harry Wilding, aged 37, a farm yardman-cattle, born in Hawstead, Suffolk, his mother Martha, aged 34 and brothers Harry, aged 14, Walter, aged 11 (farm servants) and Sidney W, aged 7. The whole family, except his father, were born in Badwell Ash.

In the 1911 census Arthur was now aged 20 and has been transcribed on the return as Frederick Wildings. He was living at White Horse Yard, Badwell Ash with his parents and brothers Walter and Sidney; all of the men were farm labourers. Martha died and was buried in Richer Road cemetery, Badwell Ash on the 21st January 1939.

His brother Walter was a Private in the Northumberland Fusiliers and was killed in action on 12th October 1917 in Belgium and is commemorated on the Tyne Cot Memorial.

Military and War: Arthur enlisted in Bury St. Edmunds as a Private, No. 26691 in The Suffolk Regiment, 7th Battalion.

Arthur was killed in March 1918 as a result of the 1918 German Army Spring Offensive or Kaiserschlacht which was a series of German attacks along the Western Front beginning on 21 March 1918. These attacks marked the deepest advances made by either side since 1914. The Germans had realised that their only remaining chance of victory was to defeat the Allies before the overwhelming human and material resources of the United States could be fully deployed. They also had the temporary advantage in numbers afforded by the nearly 50 divisions freed by the Russian surrender.

On the 26th March 1918 the 7th Suffolks were defending the Albert bridgehead, back to positions they had constructed 2 years previously. The town of Albert is to the East of The Somme battlefields in Picardy. The force of the German onslaught meant they had their backs to the wall, with very little equipment, no artillery support, no bombs, rifle grenades, trench mortars or even sufficient shovels. They were positioned along the railway track with the left company resting on the Albert railway station and the right about 300 yards south of the Albert-Amiens road. Several attacks were beaten off but at 10.20pm the Germans attacked in strength. Attack and counter attack ensued and the Suffolks had to pull back 300 yards, but managed to stabilise their position. One platoon was reduced to only 3 men (usually 30 men). Short of food and water they were relieved just before dawn on the 28th March. In the three days 26-28th, they had suffered 256 casualties. Of these 73 were killed on the 27th, with only 10 of them having identified graves. Arthur was one of these men with no known grave and is therefore recorded on the Pozieres Memorial.

The Pozières Memorial is located near the commune of Pozières, in the Somme department. It lists the names of 14,657 British and South African soldiers with no known grave who were killed between 21 March 1918 and 7 August 1918, during the German advance known as the Kaiserschlacht. 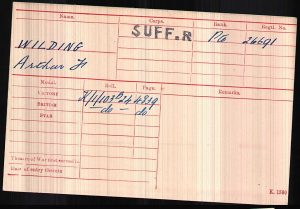