In the 1901 census, George was aged 6 and living at The Green, Badwell Ash with his father, Spencer Buckle, aged 29, a horsekeeper on farm, born in Badwell Ash; his mother Emma, aged 29 born in Rickinghall; his sister Gertrude J, aged 4 and brother Percy W, aged 2. All three children were born in Badwell Ash.

In the 1911 census George was now aged 16, a farm labourer still living at The Green, Badwell Ash, with his parents, sister Gertrude and brother Percy, plus 4 new siblings: Leonard, aged 8, Olive, aged 6, Bertie, aged 2 and Gladys, aged 9 months. All were born in Badwell Ash. Two of the nine children had died.

George was killed on the first day of The Battle of The Somme which evolved into the worst day in British Army history. Almost 20,000 men were killed on that first day and a further 40,000 became casualties including members of the 8th Battalion, East Surrey Regiment who were part of the 55th Brigade, 18th (Eastern) Division. They attacked from between Taus Boise and the Carnoy- Montauban road towards Montauban Ridge. The East Surreys started well with Captain Nevill (East Yorks) obtaining permission to kick footballs into No Man’s Land and these were supplied to each platoon. They were instructed that proper formation and distance should be kept. The two leading platoons “kicked off” at 7.30 am, but the disciplined troops stuck to orders about formation and distance and that assisted the German defenders as they were able to machine-gun the leading waves of advancing British with absolutely devastating effect. The 8th East Surreys did, however, manage to reach their objective by about 12.30 pm. and dug in on the Mametz Road, to the west of Montauban, where they were relieved at daybreak on 2nd July. 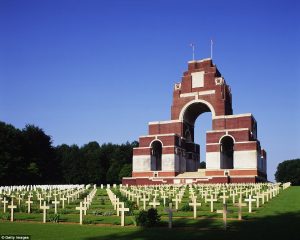 They had sustained 446 casualties, 139 of these were killed, including George Buckle, and of them 98 have no known grave and are named on the Thiepval Memorial. However, George Buckle does have a “known grave” and is buried in Dantzig Alley British Cemetery Mametz, France, grave 7:Q:2. George was

awarded the 1914-1915 Star, the British War Medal and the Victory Medal, commonly known as “Pip, Squeak and, Wilfred“. A copy of his medal roll can be seen here. 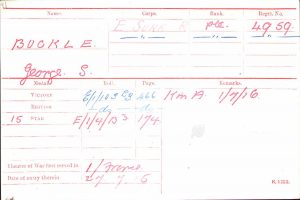 His Commonwealth War Grave Certificate can be seen here.

George was awarded the 1914-1915 Star, the British War Medal and the Victory Medal, commonly known as “Pip, Squeak and, Wilfred. A copy of his medal roll can be seen here.