Charles was born on 13th Dec 1889 although his birth was not registered until the 1st Quarter 1890 to Harry and Hannah (née Pryke) Boughton in Ashfield Magna.

The 1891 Census describes Charles as being 1 year old living with his mother and father in “The Bake Office” in Haughley Road, Bacton with his sister Laura Louisa aged 9.

In the 1911 Census, Charles, aged 21 is shown as living with his mother and father (a Carpenter), his brothers Arthur aged 17 and Frank aged 11 and a sister Annie aged 8. He is described as a farm Labourer and they are living in Norton Road, Great Ashfield.

Military and War: Charles was 26 when he enlisted at Bury St Edmunds and was enlisted as a Private in The Sherwood Foresters Regimental No. 5729, on the 15th March 1916. In his Service Record he is described as a General Labourer. However, he was discharged on the 17th August 1916 under Kings Regulations Para. 393 iii) cc) which state that these are men “…not being likely to become and efficient soldier” and para cc) stated “…recruits with more than 3 months service considered medically unfit for further military service.” fit to serve. It is believed that Charles suffered from epilepsy.

Charles’ brother Arthur Edward was killed in action in France on the 7th October 1917 and he is buried in Larch Wood (Railway Cutting) Cemetery, Zillebeke, Belgium grave 5:A:2.

Post War: It is believed Charles did not marry. He died in October 1963 aged 73 years old and is buried in Great Ashfield Churchyard. 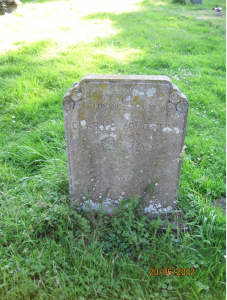