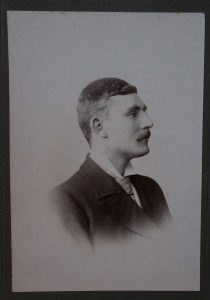 William was born in 1879 in Colchester to George and Julia Nicholls.

In the 1881 census, William was aged 2 and living at 4 Broomfield Road, Chelmsford with his brother George, aged 5 and his mother, Julia, aged 26 and father, George, aged 31 a Railway Porter.

In the 1901 census, William, now 22, was a Boarder with Mrs Wilson at East Ardsley, Yorkshire and he was now a Railway Porter. In the same year, he married Emma Sparrow who was working as a cook at the Manor House in Elmswell.

In the 1911 census, William, aged 31, a Domestic Gardner, was living in Long Thurlow with his wife Emma, aged 30 and their 4 children: George, aged 8, Hector, aged 6, Dorothy, aged 4 and Gladys, aged 2. George was born in Colchester, Hector in Elmswell (where Emma was born) and Dorothy and Gladys were born in Badwell Ash.

Military and War: Nothing is known about William’s Army career. There’s a possibility that he could have been in the Kings Royal Rifles Regimental No. R21972 as there’s a record in The Forces War records for a William Edward Nicholls who joined the service in December 1915 and who was wounded in August1917. This has yet to be cross referenced and confirmed.