1891 census: George, aged 8 and a scholar was living in Canham Green, Walsham le Willows with his mother Sarah, a Widow aged 45, his brother John also a scholar, aged 12 and his sister, aged 7.

1911 census: George, a farm labourer, aged 28 was living at The Green, Badwell Ash with his mother, Sarah aged 63, a Widow and working as a House Keeper, his 2 siblings, John 32, a farm labourer and Ada 30, a cook domestic as well as a granddaughter Ada, aged 4. All the children were single.

Military and War: He enlisted on the 5th September 1914 at Bury St. Edmunds the same day as his brother John. He was posted to the 8th (Service) Battalion East Surrey Regiment. According to his Service Record he was discharged on the 18th December 1914 as “unlikely to become an efficient soldier”. The precise reasons for his discharge were stated as: “This man is suffering from hemorrhoids. He has deformed toes on both feet and is quite unable to march or perform his duties. In my opinion he will never become efficient”. 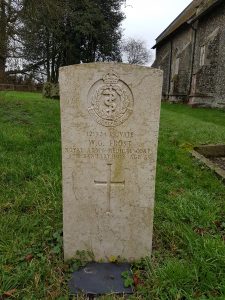 In the 1939 Register, Lily is living in Long Thurlow, now aged 53 with William H Frost, a Farm Labourer aged 22 who we assume to be their son.