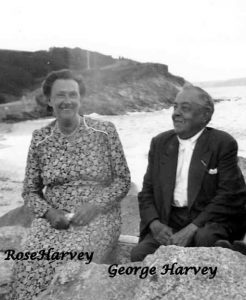 George was born in Badwell Ash in 1879. His parents were Henry and Henrietta Harvey.

In the 1881 Census: George was aged 2 and living in the High Street, Thelnetham, Suffolk with his father, Henry, aged 34 and an Innkeeper; mother, Henrietta, aged 34; Harry Frank – although Harry’s age of 4 isn’t consistent with his date of birth in 1889 – 2 years earlier!); sister Mabel, aged 10 months and Emma Rose, a servant, aged 15 from Ashfield, Suffolk.

In the 1901 Census: Now aged 22, he lived at 27, Lyche Grove, Croydon, Surrey with his wife, Rosetta, aged 20 and born in Camberwell, Surrey and their son, Jack, aged 10 months. George was a Butcher’s Assistant.

Military and War: George signed up for the army on 10th December 1915 at the age of 37 years 3 months. At the time, he was a Butcher’s Manager. He fought as a Private in the Suffolk Regiment, No. 62641 and in the 34th London Regiment, No. 897403. His Service Record is in very poor condition having been burnt but it does seem that he served abroad as there is an entry which could possibly be dated April 1918 which shows he was posted back from Calais to the U.K. He served for a total of 5 years and was awarded the War Medal and a Victory Medal. (Suffolk Regimental Museum, Bury St. Edmunds).

Post War: George presumably lived at 1 Dagnall Park, Norwood in the London area after the war and died in 1960 in Bromley at the age of 81. His wife, Rosetta, died 2 years later in Surrey.