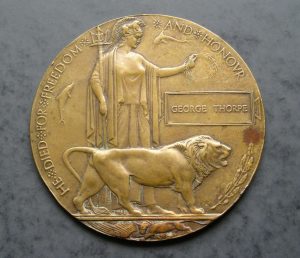 The World War One Memorial Plaque was made from Bronze and hence it was popularly known as the “Dead Man’s Penny” among front-line troops, also becoming widely known as, the “Death Penny”, “Death Plaque” or “Widow’s Penny”. It was in October 1916 that the British Government setup a committee for the idea of a commemorative plaque that could be given to the next of kin for those men and women whose deaths were due to the First World War of 1914-18.

The first a family would know of the death of family member was the arrival of a telegram from the War Office.  This would be followed by the World War One Death Plaque and any medals the serviceman would have earned serving his country.

The original plaque was a 12 centimetre disk cast in bronze gunmetal, which included an image of Britannia and a lion, two dolphins that represented Great Britain’s sea power and the emblem of Imperial Germany’s eagle being torn to pieces by another lion. Britannia is holding an oak spray with leaves and acorns. Beneath this was a rectangular tablet where the deceased name was cast into the plaque. No rank was given as it was intended to show equality in their sacrifice. On the outer edge of the disk it bears the inscription, ‘He died for freedom and honour’.  The memorial plaque was posted to the next of kin protected by a firm cardboard purpose made folder, which was then placed in a white HMSO envelope.