Unfortunately, we have not been able to find evidence of George’s whereabouts in the 1891 and 1901 census returns.

In the 1911 Census: It is here that we discover his connection with Badwell Ash because by 1911 he was married to Lily Margaret Swallow née Lynn whose father was the village baker, Nelson Lynn.  Lily and George were married in the 2nd Qtr. Of 1908 (Stow 4A-1581).   Lily, who was born in Qtr. 1 of 1887 (Stow 4A-717) was the younger sister of Walter Lynn who also fought in WW1. George was 26 and an Assistant Superintendent for the Prudential Life Assurance Company (Kellys Directory 1911). His wife was 24 and they lived in Surrey at “St Osyth”, Goldsworthy Road, Woking with their 1 year old son, George Nelson Lynn Swallow. He had been born in the previous year in Smallfield, Horley, Surrey.

Military and War. In 1914, when George was 29, the New War Office Staff (formed presumably to respond to the start of World War One) proposed to raise a number of Anti-Aircraft Sections, which would officially be Companies of the Royal Garrison Artillery. The target was to raise one section for each of the Divisions going to France. George was therefore enrolled in the Anti-Aircraft Corps, Royal Garrison Artillery as a Gunner, Regimental No. 82560 and presumably this was for the duration of the war. He received the Victory and War medals. His Medal Roll can be seen here. 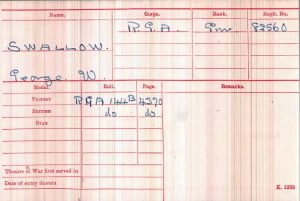 In the 1939 register, George and Lily, 58 and 56 respectively, were living in Oakfields Road, Reigate, Surrey. George is described as an Assurance Superintendent.