1891 census…Ernest was aged 2, and living at Badwell Green with his father Walter Redit, aged 42, a Blacksmith, who was born in Badwell Ash, his mother Janet F, aged 44, born in St. Day, Cornwall, sisters Lettie, aged 13 and Florence, aged 7, brothers Bertie, aged 9, George, aged 6 and Arthur, aged 4. All the children are recorded as being born in Badwell Ash.

1901 census…Aged 12, now a domestic gardener and still living at the same address with his parents and brother George, an agricultural labourer.

1911 census…He was living as a Boarder with Walter and Ellen Marshall in The Street, Gosfield, near Halstead, Essex and his trade is described as a Blacksmith. His parents were still at The Green Badwell Ash and his wife to be was in Great Barton with her mother. He married Amelia Mary Last from Great Barton in Bury St. Edmunds in Q2-1911.

Military and War: He was especially enlisted in Braintree as a “Shoeing Smith”.

Ernest died of pneumonia on Wednesday, 30th October 1918 at Etaples, Pas de Calais, which was the base for many hospitals. In the absence of his Army records there is no telling where Ernest was when becoming ill. His widow’s addresses after his death were either “Langmarche” Rayne Road, Braintree, or 49 Wheatley Avenue, Braintree (1928).

He was awarded the 1915 Star, Victory and War medals and the WWI Commemorative Plaque. His Medal Roll can be seen here. 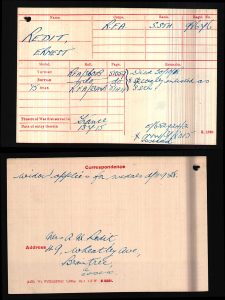