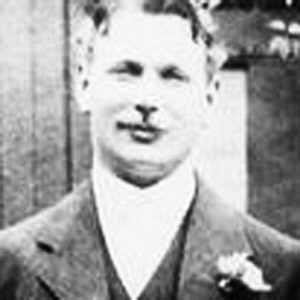 1891 Census: He lived in Badwell Street and was 5. Also in the house were his father Wallace, aged, 31, a Farm labourer; his mother Sarah, aged 29 and his siblings, Herbert, aged 7 and Florence, aged 2. Unlike his other siblings and the rest of the family, Herbert had been born in Ixworth which would suggest that their father, Wallace, moved away for a brief period between 1883 and 1885.

1911 Census: Alfred had left home by this time and was living at 10, Compton Terrace, Hoppers Rd., Winchmore Hill, Middlesex near Edmonton with his uncle and aunt, Harry Fuller, aged 43 and Elizabeth, aged 42. Also in the house were 4 cousins, all younger than Alfred who was a Carman, a driver of a cart or van. His uncle was a Coachman in Service.

Military and War: According to Alfred’s Service Record he signed up for a 3 year period of army service on 29th October 1903 when he joined the 2nd Battalion Suffolk Regiment as a Private, Regimental no. 6643. On 28th October 1906, having completed his service, he was transferred to the Reserve Army at the age of 21.

It would have come as no surprise, therefore, that he was mobilised for war service right at the start of the First World War on 5th August 1914 in Bury St Edmunds. Ten days later he was posted to France to fight.

His war only lasted for just over 3 months. On 29th November 1914 his medical record records that “ …The patient was buried after an explosion in the trenches”.   He spent 11 days in the hospital in Boulogne with a further month in Paignton, Devon followed by 2 months in Bury St Edmunds.

On 29th September 1915 at the age of 29 he was discharged from the 3rd Battalion of the Suffolk Regiment under King’s Regulations Paragraph 392 (xvi) as no longer fit for service because of a permanent back injury caused by his injuries sustained when he was buried in the trenches. 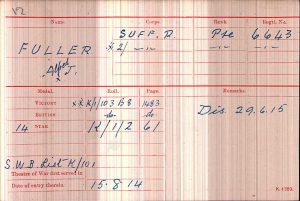 Post War: Leaving the army, he became a Postman in London on 25th September 1915. This was clearly a good day in Alfred’s life because on the same day as he got the job, he was married to Annie Amelia Butcher, aged age 27 at St Thomas’s Church, Stepney in London. Photographs of their wedding can be seen below. They had 4 children, Albert, Alfred, Doris and Michael, born 20th March 1942. They lived at 62 Copley Street, London E1 and then moved to 634 Arundel Square, Islington, London, N7. Later in life, he became a Railway Wagon Repairer.