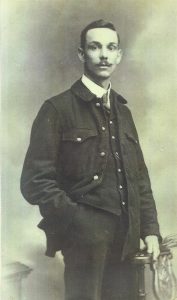 Died of his Wounds on Thursday, 17th September 1914   He was an Old Contemptible. 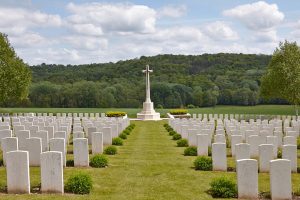 Note: “His name is GARDNER on the church plaque, the Army have him as GARDENER and GARDINER, Census uses all versions and CWGC have GARDINE, Hopefully I have traced the same man through all of this, GARDINER seems to be the most common spelling used.”Tony Pringle “Lest We Forget” 2014

In the 1891 census Herbert, aged 8,was living at The Green, Badwell Ash with his father David, aged 42, an agricultural labourer born in Risby; his mother Emma M, aged 42 born in Westhorpe; brother William J, aged 16, a wheelwright’s apprentice, born in Pakenham; brother Harry J, aged 14 an agricultural labourer born in Hepworth and a sister Ethel, aged 2 born in Langham.

In the 1901 census Herbert was now aged 18 and an engine cleaner, living with his brother William J Gardiner and his extended family at 1 (Coffee Tavern), Transfer Terrace, Swindon, Wilts. Aunt Ethel seems to have several of her family (Clark) living there as well, mostly Walsham le Willows born. We presume as he was an “engine cleaner” living in Swindon that this referred to railway engines operated by The Great Western Railway as Swindon was their headquarters.

In the 1911 census now aged 27, Herbert was shown as being an unemployed soldier, still single and is living back home in Badwell Ash with his parents. It is recorded that 2 out of 8 children have died. This previous spell as a solder would account for his posting to France so early in the war as he would have still have been on the Reserves.

Military and War: He enlisted in Bury St. Edmunds in 1901 and was posted to the 1st Kings Own Rifle Corps as a Lance Corporal.

In Herbert’s official mourning portrait published after his death, there appears the following quote:

HERBERT GARDINER – L-Corp – The Kings Royal Rifle Corps.   Herbert Gardiner was the youngest son of Arthur David Gardiner, of The Street, Badwell Ash; enlisted 1st January 1901; served eight years with the Colours, including several in India, then joined the Reserve; was called upon the outbreak of the European War; served with the Expeditionary Force in France and Flanders from the 21st August 1914and was killed in action at Venereull, near Bourg.16th September following from wounds received in action the same day. Buried in the burial ground behind the Chateau there. He was promoted Corpl. On the field the day before he died.

He has an entry in De Ruvigny’s Roll of Honour which states “Gardiner, H., L.- Cpl, No. 2588, 1st Battn. The King’s Royal Rifle Corps; served with the Expeditionary Force in France; died of injuries received in action 17 Sept.1914.”

A further entry is: – “GARDINER, Herbert, L-Cpl., The King’s Royal Rifle Corps, 1st. son of Arthur David Gardiner of The Street, Badwell Ash, Suffolk, by his wife, Marie;( b.16 May,1882), educ. Badwell Ash School; enlisted 1 Jan, 1901; served 8 years with the colours, including several in India, then joined the Reserve; was called up on the outbreak of the European War; served with the Expeditionary Force in France and Flanders from 21 Aug. 1914 and was killed in action at Venereull, near Bourg, 16 Sept. following wounds received in action the same day. Buried in a Burial Ground behind the Chateau there. He was promoted Corpl on the field the day before he died.”

So far his Army records for either period of service have not been found. That may be due to them not surviving or simply the confusion over the many ways his name has been spelled.

His medal index card shows his award of the Clasp to his 1914 Star (the Old Contemptibles medal) indicating he came under fire at that time. His medal roll can be seen here. 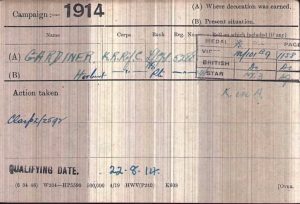 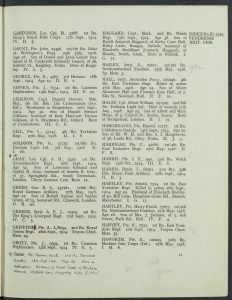