1911 census: Charles, was aged 14, a farm labourer and was living in Wyverstone Road, Badwell Ash with his father Arthur, a farm labourer aged 48, his mother, Sarah aged 44 and his 5 siblings, Arthur, aged 16, (who also enlisted) Daisy Maria aged 11, Bertram aged 9, Elsie aged 6 and Ellen Mabel aged 11 months. That means that Harry and Sarah had a total of 9 children in 24 years.

Military and War: Private: Served in 3/5th Battalion, Suffolk Regiment. From his medal record he seems to have been in two separate regiments as he has two separate Regimental Nos. 43876 and 70278.   He was awarded the War and Victory medals. Charles’ Medal Roll can be seen here. 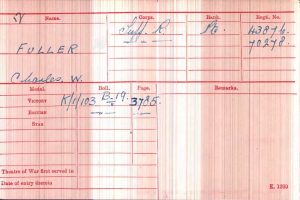 Unfortunately no other record details have been located. It is highly possible that Charles’ records have been destroyed. In September 1940, as the result of a fire caused by an incendiary bomb at the War Office Record Store in Arnside Street, London, approximately two thirds of 6.5 million soldiers’ documents for the First World War were destroyed. Those records which survived were mostly charred or water damaged and unfit for consultation and became known as the ‘burnt documents’.