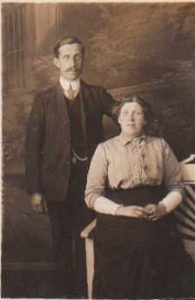 Albert was born in 1879 in Great Ashfield to William and Betsey Finter.

In 1901 he married Anne, née Rodwell. They had one daughter, Dorothy

1911 Census: Aged 36, living in Long Thurlow Road as a domestic gardener with Anne aged 36 and their daughter Dorothy, aged 8.

Military and War: Albert served as a driver in Army Service Corps. Regimental No: T4/198394.

On the 18th September 1920, Albert Finter was awarded the Victory and War medals “Mutt and Jeff”. His Medal Roll can also be seen here. 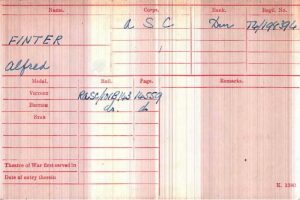 Unfortunately no other record details have been located of Alfred’s army career. It is highly possible that Alfred’s records have been destroyed. In September 1940, as the result of a fire caused by an incendiary bomb at the War Office Record Store in Arnside Street, London, approximately two thirds of 6.5 million soldiers’ documents for the First World War were destroyed. Those records which survived were mostly charred or water damaged and unfit for consultation and became known as the ‘burnt documents’.