Albert Muskett is commemorated on the Menin Gate in Ypres, Belgium, panel 21. 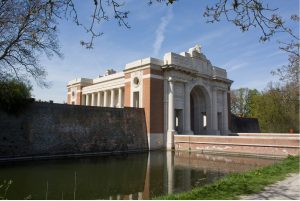 In the 1891 census Albert was aged 3 and living at Sadler’s Yard, Badwell Ash, with his father Alfred Muskett, aged 49, an agricultural labourer, his mother Eliza, aged 31, brothers John H, aged 10 and Harry, aged 8, sisters Elizabeth E, aged 6 and Anna, aged 8 months. All the family were born in Badwell Ash.

In the 1901 census Albert now aged 12 was at The Street, Badwell Ash with the same family group, father now described as an Army Pensioner/Road Labourer; John was an agricultural labourer and Harry was a railway servant. Sister Elizabeth was a domestic servant.

On 11th April 1901 his brother John enlisted in London as a Private in the Grenadier Guards.

In the 1911 census now aged 23, Albert had joined the Suffolk Regiment and was in Egypt. That would have been at the Mustafa Pasha Barracks in Alexandria .His widowed mother was at White Horse Yard, Badwell Ash with his brother John. It is recorded that of the nine children born to Eliza, 4 had died.

Military and War: He enlisted in Bury St. Edmunds in December 1908.

Despite his being a regular soldier, his Army records have not been found but we do know that he was awarded the 1914/15 Star, The War Medal and The WW1 Memorial Plaque. (Suffolk Regimental Museum, Bury St. Edmunds)

In May 1915 the 1st Suffolks were in Flanders. Early in the month, hostile aircraft and artillery had been taking a toll on the strength and on the 4th Suffolks. They were bombarded by trench mortars, killing 1 officer, wounding 3 more and killing 12 other ranks, none of whom has a known grave.

From the Forces War Records website, if we assume Albert stayed with the 1st Suffolks, then the sequence of events leading up to the 4th May 1915 are as follows:

On 26th April 1915, the German Army launched an offensive (including the use of poisonous gas) against the Ypres Salient, driving its perimeter back and creating a break in the line over 4 miles long. Canadian troops (the closest) created a series of defensive posts to secure the line, which, although briefly held, broke and St Julien fell to the Germans.

At the request of the French, British and Commonwealth troops staged counter-attacks but were forced to withdraw, until on 3rd May the Allied lines were only 3 miles from Ypres. The bitter conflict continued with the Germans taking Frezenberg Ridge, although Allied counter-attacks carried on for several more days, incurring heavy casualties.

On 24th April, three battalions of 84th Infantry Brigade, 28th Division in V Corps, 1st Suffolk Regiment, 12th London Regiment (The Rangers) and 1st Monmouthshire Regiment, were sent to assist the Canadians and made an advance towards Fortuinhoek, holding this advanced position until relived on 28th April. 84th Infantry Brigade and 85th Infantry Brigade also held off strong German attacks on their front on 25th April and 26th April with the assistance of newly arrived reserves from other divisions.

On 3rd May, a further German attack put pressure on the front of 85th Infantry Brigade and 4th Division on their left, 1st York and Lancaster Regiment, 2nd The Buffs (East Kent Regiment) 3rd Royal Fusiliers, 2nd King’s Own (Royal Lancaster Regiment) and 2nd East Yorkshire Regiment being deployed to assist in defending the line.

During the battle, the weather conditions favoured the use of chemicals so the defenders were not surprised but many suffered the effects of being gassed. Rapid British small arms fire repulsed the attack and the centre of the line held, although the German attack broke through in the north and south.

The 1st Suffolk Regiment suffered particularly heavily, having only 30 uninjured men left at the end of the day, while 1st Monmouthshire Regiment‘s survivors around 120. 2nd Northumberland Fusiliers staged a strong defensive action at Mouse Trap Farm to halt the attack in the northern sector of the line.

The Medal Index Cards, which mostly survived, are a useful source of information in so far as Campaign medals and Regiments. Much of the detail is incomprehensible to us since the various entries refer to locations in books and ledgers. They do tell us which theatre of war the soldier first entered and when. The date of death is usually correct and most often all the regiments the soldier served with are entered. Where there is a star drawn against an entry it denotes what detail should be impressed on the actual medal. Medals for valour are not often entered on these cards. Unfortunately any equivalent for soldiers in later conflicts is not available to the public.

There was a Death Announcement in the Bury Free Press of June 12th 1915 which stated: Killed in Action. MUSKETT – Albert Killed in action of May 4th 1915 with the British Expeditionary Force, 7810 Prvt, Albert Muskett, 1st Suffolk Regiment, youngest son of the late Alfred and Mrs Muskett of Badwell Ash, Suffolk, aged 26 years.

Albert was awarded the 1915 Star, British and War medals and “The Dead Man’s Penny” . 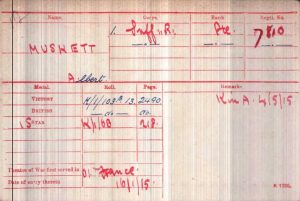