It is very likely that Ernest was injured at The Battle of Albert that took place between the 21st and 22nd August 1918. The notes of the battle from The Forces War records state: “Battle of Albert – 21/08/1918. The battle took place at Irles between Albert and Arras. It turned out to be a decisive Allied victory. In holding the German Spring Offensive, the Allies and particularly the B.E.F. took increased confidence in their ability to turn the tide of war in their favour.

Replacement troops, including newly-arrived Americans, and new equipment helped to rebuild after the losses earlier in the year and it was decided by the Allied command to go on the offensive. The Third Army, still under the command of General Byng were to take and hold the alignment of the Arras to Albert railway.

For the first time, the infantry were trained to work in co-operation with the armoured regiments (the new Whippet and Mk V tanks were much improved compared to their predecessors) and to coordinate with the RAF when air cover was needed.

During the battle, Corporal G. Onions, 1st Devonshire Regiment being awarded a Victoria Cross for his action on 22nd August.” 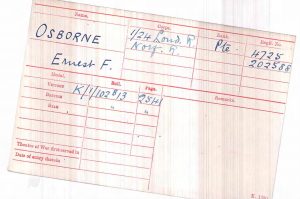 Post War: Ernest did not live in Badwell Ash at the outbreak of WW1 but moved to the village after the war. When he was 43, he married Alvina Joyce née Robinson, who was 16 years old in the 4th Qtr 1937, in the Hartismere District. Alvina was born on 8th March 1921.

Their first child, Betty was born in early 1938 and it seems likely she was conceived out of wedlock. They went on to have 5 other children. One of his sons, Ivan, was also called Winger.

In the 1939 register he is shown as living in Clay Hill Cottages with Alvina and Betty but according to research within the village they moved to 8, Hunston Road when these “new” council houses became available in 1938/9. According to Phyllis Manning, “Winger” and the family swapped their house in Back Lane with them and then moved to 8 Hunston Road.

Ernest Osborne was known as “Winger” due to the fact that he had lost part of one of his arms just above the elbow during the War. He had a specially adapted bicycle to get him to Blacks of Bacton (a fruit farm) where he worked (Thanks to Malcolm Frost).