On the Badwell Ash War Memorial as John Smith

Anna Maria, Frederick’s mother, is shown in the 1939 Register as living in Church Lane with George aged 26, Reginald aged 36, Rhoda aged 26 and another family member whose record is still officially closed and cannot be seen.  Anna Maria died and was buried on the 1st September 1942 aged 64 in Row 8, Plot 20 in the Richer Road cemetery.  By the time of her death she is shown as living in No. 1 Council Houses, Hunston Road, Badwell Ash.

It is difficult to trace the service history of WWII casualties unless the immediate relatives are able to help due to confidentiality and the 100 year rule.

Frederick joined the RAF and trained as a Wireless Operator (date unknown).  When war broke out in 1939 the Air Ministry employed the Royal Air Force Volunteer Reserve (RAFVR) as the principal means for aircrew entry to serve with the RAF. A civilian volunteer on being accepted for aircrew training took an oath of allegiance, an ‘attestation’ and was then inducted into the RAFVR. Normally he returned to his civilian job for several months until he was called up for aircrew training. During this waiting period he could wear a silver RAFVR lapel badge to indicate his status. 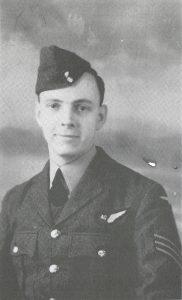 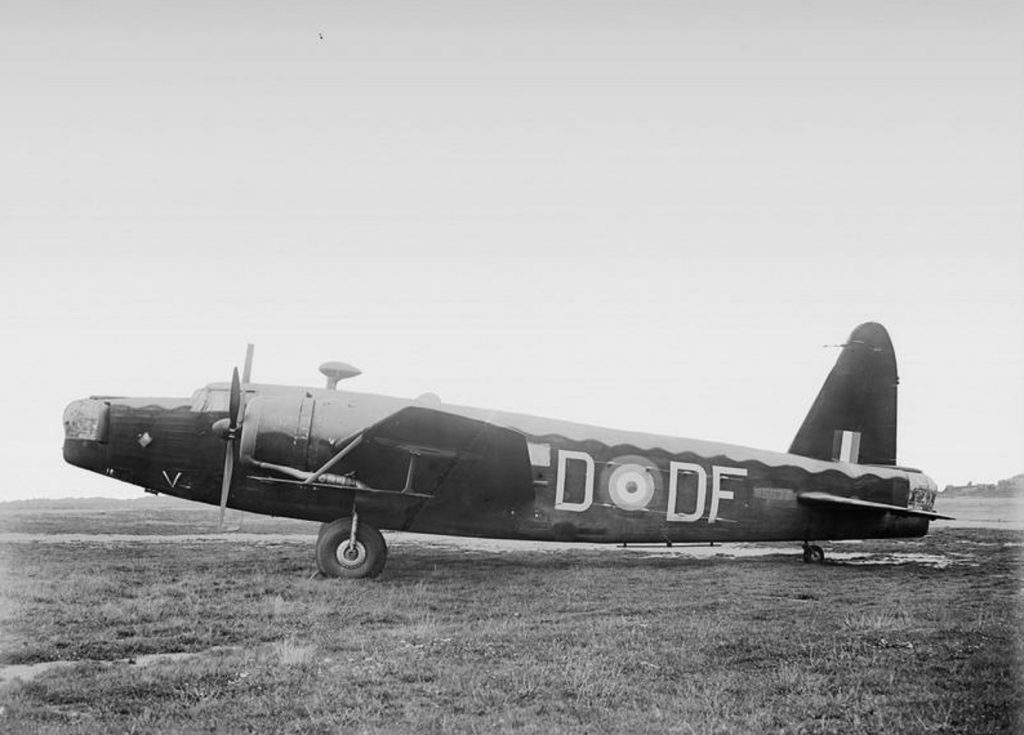 A small number of Mk VIIIs were produced for anti-submarine warfare including the Wellington HX732 which Frederick flew in. The aircraft was fitted with a Leigh Light as well as radar. This was designed to solve one problem when using radar against submarines – at ranges of under a mile radar contact was due to interference from the surface of the sea. A Leigh Light equipped anti-submarine warfare aircraft would use radar to discover the U-boat, and close to the limit of radar range, and then turn on the Leigh light for the final approach, by which time it would be too late for the U-boat to dive to safety.

A Wellington fitted with a Leigh Light

Ross McNeill, the Squadron historian for No.22 Sqn., 1939 to 1945, has written extensively about the RAF Coastal Command’s losses in WWII and has written a detailed account of what happened to Frederick’s patrol on the 8th November 1942:

At Walls, on the West coast of Shetland a four man manned a motor boat put out, but they only found pieces of wreckage. The Aith, Shetland life-boat was also launched, but found nothing.

Of the six crew, four drifted ashore, in the darkness, in their dinghy; Frederick went down with the aeroplane and the sixth was washed ashore dead. Sgt Smith is commemorated on the Runnymede Memorial and Sgt McGrath from Edmonton, Alberta, rests in Wick Cemetery, Caithness. ”

A second aircraft was also lost on the same patrol due to engine failure.

Extract from Donald A Fraser’s book, “Live to Look Again”:

The book is dedicated to the memory of Warrant Officer James Patrick McGrath (“Red”) RCAF Rear Gunner and Sgt.  Frederick Victor”John” Smith, RAF, Wireless Operator and all those who did not return.

Pilot Officer Donald Fraser, who was originally a Pilot Officer with the Royal Canadian Air Force, the pilot on Frederick’s fateful mission, was rescued after the Wellington crashed and returned to active duty.  After the war, he returned to Canada to work as a lecturer at the University of Toronto. He retired in 1983 and decided to write a book about his life with the RCAF and RAF during WWII.  The book, entitled “Live to Look Again” includes a very graphic personal account of that fateful mission on November 8th.

“November 8th was again very windy. Nevertheless we took off …..at 1700 hours. The plane was fully loaded with depth charges and petrol, including the fuel overload on which we were running.   I climbed up until just below the snow spitting clouds and we continued flying at an altitude of a 1000ft, our patrol height. We passed to the east of the Orkneys, then west of Fair Isle, and on between Foula island and the West side of The Shetlands.  It was dark, forbidding night with strong winds from the northwest.

Suddenly, the starboard engine belched sparks and began to lose power.  Automatically, I opened up the throttle on the port engine and increased the revs, applying opposite rudder to prevent a swing to the right. We had already dropped to about 800 ft. Checking the petrol switches I changed to the wing tanks with the crossover feed open. The waves below were clearly visible and growing closer every moment.  I jettisoned the depth charges. We were still sinking so I pulled the fuel jettison lever and shouted “Dinghy, Dinghy “to the crew, an order to prepare to man dinghy stations in case we had to ditch.  Smitty (Frederick Victor Smith) had started to send out an SOS as soon as the power died and Ron Davies was preparing a course to base, meanwhile shouting that Sumburgh Aerodrome on the southern tip of Shetland might be a better to reach than Wick, which was over 100 miles away.  I gradually eased the plane round to the right, both to get closer to The Shetland Isles and to bring us on a reciprocal course to base.  By this time we were below 500 ft. I gave the crew immediate orders for dingy stations.  Ron grabbed the Very pistol and some cartridges and scrambled back behind the main spar.  He dropped the plastic cover of the astrodome to prepare an exit for himself and Hutch (Sgt Hutchinson), the ASV operator (Air to Surface Vessel Radar), Smitty, our wireless operator and Len (Sgt Thompson), the second pilot.  Red, (Sgt McGrath) the rear gunner pivoted his turret to one side and jettisoned the doors, so that he could get out of the plane directly.  Len helped to jettison the escape hatch above my head before moving back in the fuselage to prepare for escape out the astrodome.  I eased the plane towards the coast but it was only a few seconds until we were 100 ft. above sea level.  It would only have been a few minutes before we crashed, so I decided it would be better to ditch whilst the plane was still under control.  The port engine was roaring, the starboard engine had been continually spitting out sparks but doing little else and its propeller was just turning over slowly with the force of the slipstream wind – no joy from the throttle control.  I had opened the bypass gas valve earlier, but no response, even with both engines drawing petrol from the main wing tanks.

The water drew closer and closer; just before we went in I held the nose up and cut the port engine.  The whole plastic nose caved in immediately upon impact and suddenly green water was gushing in around me.  I was thrown forward and upward out of my escape hatch, and the next moment was swallowing a mouthful of brine as I cannonballed into the water.  When I came, gasping and choking, to the surface, I peered around in the blackness of the night. Only the tall, shark like tail fin of the “Wimpy” was still visible above the rough surface of the water.  To its right I finally spied the dingy, open but lying on its edge partly submerged. It must have come out automatically, but was still held to the sinking plane as if by an umbilical cord.  I swam toward it, kicking off my flying boots as I went.  My Mae West stood me in good stead.  Two other figures, then there suddenly appeared to my right.  I made it to the dinghy about the same time as Len and Hutch. Luckily the cord broke as the plane sunk deeper. I helped push Hutch into the dingy, then Hutch pulled Len whilst I pushed. …….I climbed aboard and looked for Ron Davies who had been swimming right behind me.  As he reached the side of the dinghy I leaned over and grabbed his collar………With Hutch and Len pulling and me pushing we managed to get Ron abroad, at last.  There were only four of us out of a six man crew. Red and “Smitty” had not appeared……almost as soon as we began shouting we heard a voice came out of the darkness – it was Red…….Red’s disembodied voice came weakly back…”where are you?…  “Here, can you swim to the dinghy.  Hearing but a faint reply we unshipped the paddles and began to paddle as hard as possible toward Red’s voice.  We couldn’t see him; the waves were tossing our dinghy high into the air and back down again.  It was impossible for us to make any headway.  Red found it no easier and his voice gradually faded away………we continued paddling for over an hour in the direction in the direction we had last heard Red’s voice, but to no avail, the wind and the waves were against us…….There were still no signs of “Smitty”.

…..For hours we continued paddling in what we hoped was Red’s direction….Finally we saw steep cliffs on our left; white breakers shimmered ghostlike in the darkness, and a rock appeared in the water ahead of us.  We paddled the dinghy around to the other side of the rock where the waves were slightly calmer and were thrown violently ashore as we tried to beach the dinghy.  Len and Hutch were the first ones on dry land and I balanced the dingy whilst Ron climbed on to the slippery rocks and finally I disembarked……..I wondered where Red was. And “Smitty”- there was no sign of him; he must have gone down with the aircraft, probably sticking to his wireless sending out his SOS to the last….

The four men climbed the steep cliffs and were eventually found by a fisherman who had seen the burning plane go down in the sea and was looking for the aircrew.  He took them back to his cottage where they warmed up and were given hot tea by the fisherman’s wife. Eventually, an ambulance from Lerwick came to pick them up and they were taken back to RAF Station Lerwick where they were patched up and eventually returned to RAF Skitten.

………Sgt McGrath’s body was eventually washed up on the Shetland Islands but “Smitty’s”, Sgt Smith’s body was never found 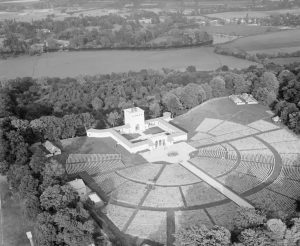 Frederick is also commemorated on the RAF Skitten memorial which has the inscription 1939 – 1945/ in grateful/ and/ everlasting remembrance/ of all service personnel/ who flew from Skitten airfield/ and did not return/ peace among nations. 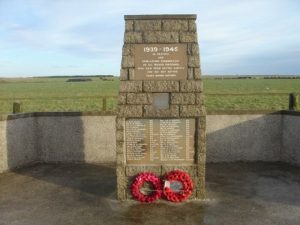