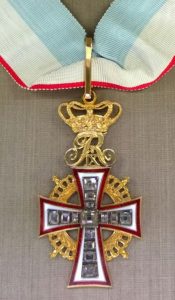 The Order of the Dannebrog (Danish: Dannebrogordenen) is a Danish order of chivalry instituted in 1671 by Christian V.  Until 1808, membership in the order was limited to fifty members of noble or royal rank who formed a single class known as White Knights to distinguish them from the Blue Knights who were members of the Order of the Elephant. In 1808, the Order was reformed and divided into four classes. The Grand Commander class is reserved to persons of princely origin. It is only awarded to royalty with close family ties with the Danish Royal House. The statute of the Order was amended in 1951 by a Royal Ordinance so that both men and women could be members of the Order.